Second story up is „Seven Years of Peace and Quiet“, which I wrote a couple of years ago for that same friend that I wrote „Maybe“ for. We’re a strange sort of friends, I suppose, if I send him stories like these. Enjoy.

Seven years of peace and quiet, is what Mommy says. And then, she says, he just went crazy. Daddy is standing next to her and nods.

They are talking to a police officer while I get to sit on the back of his car. There are many cars in our street today, most of them are firefighters. I asked if I could sit in the firefighter car, but they wouldn’t let me.

Daddy said they were busy putting out the fire of Mr. Crinkles’ house.

Some weird incidents, says the police officer and my parents both nod. A weird couple of weeks, they say. So weird. But they don’t tell him how weird, so when one of the other officers comes over to offer me some candy and asks what happened, I tell her. Because I might only be a child and I might not remember all of the ‘peace and quiet’ my Mom is talking about, but I remember the weird couple of weeks.

It all started out with a car. Daddy called it a ‚piece of crap‘, but Mommy wouldn’t like me repeating that word. Daddy only said it when Mommy wasn’t around. He said it was old and dirty and it wouldn’t even start anymore. Mommy said it was a ’sore spot‘ in our neighborhood.

That car belonged to our neighbor, Mr. Crinkles. And even though it wasn’t working anymore, he kept it in his driveway. Daddy once told me it was for ’sentimental reasons‘.

Around the same time, we had a tree in our front yard. We kept it there because it brought us shade during the hot summer days, not for ‘sentimental reasons’. I just want to make sure that’s clear. Our tree had a reason to be there. That car didn’t.

If that car hadn’t been in the driveway but rather at the mechanics to be fixed, it wouldn’t have been crushed by our tree the night of the terrible storm. And if our tree hadn’t fallen and crushed that car, I wouldn’t be sitting here, telling you this story.

You see, it’s not my parents’ fault. It was the stupid car.

For some reason, though, Mr. Crinkles didn’t see it that way. He came over the next day and started yelling at us and blaming my parents. He said something about rodents and roots and some word starting with ‚inf-‚ that I didn’t know the meaning of. I didn’t know what ‚rodents‘ were but I knew he was wrong, of course, because my Daddy told him so.

It was the storm, Daddy said, and then he made me go into the other room. I’m pretty sure he said the words ‚piece of crap‘ that day.

A couple of days later, I found out what ‚rodents‘ were. I don’t know why grown-ups use such fancy words for everything. Why do they have to say ’sentimental‘ when they mean ’silly‘ and why do they say ‚rodents‘ when they mean ‚rats‘? Because that’s what rodents are. Rats. I found out because they were in our basement and Mommy was yelling that we were having them down there. We’ve never had rats before that day. I’d always wanted a pet, but my Mom has to sneeze when she’s around them, so I never got one. Daddy said he’d take care of it, though, and sent us both to bed.

The next day, we didn’t have any rodents anymore. I asked Daddy if I could have a rodent for a pet but he said no. He said rodents weren’t pets, but I don’t agree. I’d seen a car with the word ‚rodents‘ on it in Mr. Crinkles’ driveway just that morning, so obviously, he must have had one. Maybe he had ‚bugs‘, too, because that was also a word on the car. Maybe he had them for ’sentimental reasons‘ like the car.

A week after I found out Mr. Crinkles was allowed to have rodents for pets —which my friend Thomas totally said was true when I asked him at school— our air condition broke down. Mommy picked me up from the bus and she was saying bad words the entire walk back. I didn’t think it was fair that she got to say all the bad words, but she said she was allowed because she was a grown-up. I just wasn’t allowed because I was so young. I made sure to remember a few words I thought sounded good for when I was grown. Daddy fixed the AC that night and then had a long talk with my Mom. They made me go into the other room, but our house has thin walls. They were talking about Mr. Crinkles and his pets, so maybe I would soon get a pet, too.

When I came home from the bus yesterday, Mr. Crinkles was standing on the sidewalk. He seemed confused. His pants were wet up to his knees, as if he’d taken a bath and forgotten to take them off. And then, when I asked him about his pets, he looked at me funny and said he didn’t have pets. But when I asked about his rodents he said he had taken care of them. Maybe he was being ’sentimental‘ again. He called me back when I was at our gate and said to tell my Daddy that he would pay him back. I thought that it was really nice of him to pay for our broken tree. But when I told Daddy that Mr. Crinkles would pay for our tree, he wasn’t happy. He was even unhappier when the lights in our house went out.

They’re fixed now, though, I tell the police officer. She’s nice and gives me some more candy. I make sure that my Mommy isn’t looking at how many I grab. Mommy always makes me stop at one. I ask the police officer if she knows where Mr. Crinkles is. He’s the only one not here, which is weird because wouldn’t he be there when there’s a fire in his house? She says they’re not sure. I ask her about his pets and she says they’ll make sure to look for them.

I think Mr. Crinkles’ lights were broken, too, I say and the officer smiles. But my Daddy is very nice. He said he was going to go over and fix them for him last night. 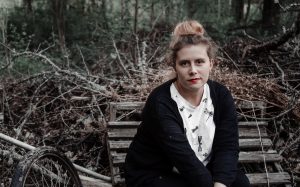